skip to main | skip to sidebar

ANCHORAGE, AK-(Jan. 1,2012)-While it has been quite some time since this blog has had a new post it has recently received an unusual amount of comments.
Rob Kane has not contacted me, and I have not made an effort to seek him out. This blog was started in an effort to flush out the real facts about this enigmatic individual.  For this reason some of the negative emotional comments have been allowed.
If and when contact with Kane is made it will be posted here.
Happy New Year 2012...

Kane...alive and well in Oklahoma?

By Rob Stapleton-
Anchorage, AK (April 11,2010)--I have not personally heard from Rob Kane about his where-abouts, or activities. However I feel it is important to post that I have been contacted by unknown persons to me that he is alive and well in Oklahoma.  I know not where or what he is doing. Perhaps he will visit this blog someday and fill us in.
There are many of us who would like to know what you are doing Mr. Kane?
Posted by Akfotoman at 5:23 PM 16 comments:

By The San Francisco Chronicle

A former San Francisco prosecutor who inherited a role overseeing a multimillion-dollar trust has been sentenced to an 8 1/2-year prison term and ordered to repay the $52 million in trust funds he misappropriated and spent in just six months in Alaska, authorities said.
Mark Avery, 48, pleaded guilty to wire fraud and money-laundering charges in federal court in Alaska in March 2007. After repeated delays, he was sentenced Thursday by U.S. District Judge Ralph Beistline and immediately sent to federal prison.
Avery, who has filed for bankruptcy protection and most recently was living with relatives in Vallejo, worked as a prosecutor in San Francisco before he was fired by then-incoming District Attorney Terence Hallinan in 1996.
His father, Luther Avery, was one of the nation's pre-eminent trust attorneys. When the elder Avery died in 2001, Mark Avery inherited his role in charge of a charitable trust run out of San Francisco on behalf of the late May Smith, a wealthy widow.
Avery illegally borrowed against the trust and spent the money on a ragtag fleet of vintage war machines, including World War II planes and a fleet of fighter jets in Alaska, prosecutors said.

His attorney said he fell under the influence of Robert "Commander" Kane, a swashbuckling figure who convinced Avery that the fleet would be useful to foreign clients fighting rebel armies.
The spending spree drew the attention of the FBI and Internal Revenue Service in Alaska, triggering the federal investigation. Smith suffered from Alzheimer's disease and died in 2006 without knowing what had happened.
Avery spent the trust money in six months, but his defense lawyer has said he always intended to pay it back.
"Mark did not approach his position as trustee with the idea that he was going to steal $52 million from it," attorney D. Scott Dattan said. "That was not his intention when his father died."
Avery faced a minimum of 14 years in custody under federal guidelines, but government prosecutors asked that he be sentenced to a shorter term because he was cooperating with a continuing investigation into the trust fraud.
Steve Skrocki, the federal prosecutor, said there was no evidence Avery considered the money he took to be a loan.
"He took the money and kept taking it until there was no more left," Skrocki said. "He didn't stop at $10 million. He took the entire $50 million and then some. And no one checked him on it."
Skrocki said Avery had betrayed Smith and her trust. "None of the things he did was for her benefit," the prosecutor said.
Posted by Akfotoman at 8:56 AM 1 comment:

Anchorage, AK-Jan. 29, 2008-Early this month I received a message that former Alaskan Rob Kane had been found dead in the Philippines by his wife Karen.

The message came from a contact of Kane's that I was familiar with, only by name. Other than that one message--no other contact has been possible.

According to the brief dispatch--he had been pushed, or jumped from a building--near or in the place that they were living on the island of Mindanao.

Neither e-mail, telephone, or Skype contact was ever returned by Kane, or his wife Karen.

My efforts to contact Kane have failed, but according to bloggers and newspaper reporters there was no story, or information about his death, or the death of a U.S. Citizen during that same time period.

The mystery of Rob Kane continues, this time with his disappearance--or death.

OIG Hiding, or Incompetence..No too busy?

Anchorage, AK-Nov. 4, 2007-The latest in the query into how the civil rights of Rob Kane were violated by the FBI while investigating Mark Avery and Security Aviation is just as puzzling as the rest of the case.
A complaint filed with the OIG by myself, "yours truly" came up with the letter posted previously, so I called the OIG office and asked them once again, Why would the OIG ask the FBI to investigate itself?
The answer is obvious, they don't want anything to do with the case complaint, or they are investigating it and don't want to let the cat-out-of-the-bag.
"We get thousands of complaints and don't have time to investigate them all," according to Cynthia Schnedar. "You will have to read our latest report of activities online and you might understand why."
But look at what she said. "Thousands of complaints."
This doesn't exactly give me a warm and fuzzy feeling about our government at work.
And now the FBI has been advised to investigate itself if they find cause.
That's cause for alarm enough.
We will see if the FBI received the letter from the OIG, or is this just further a ruse to buy time...another FOIA is on its way Cynthia.
Standby.
Posted by Akfotoman at 8:56 PM No comments: 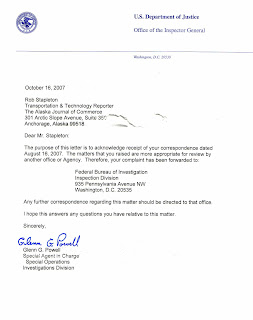 When I sent a complaint to the Office of the Inspector General on Aug. 16 about the odd, and ruthless investigation into Security Aviation, and trial of Rob Kane by the FBI, it was lost, and I re-sent it three times.
Today I received the following letter that indicates that the OIG wants the FBI to investigate itself.
This is strange, how can this be?

Posted by Akfotoman at 6:10 PM No comments: 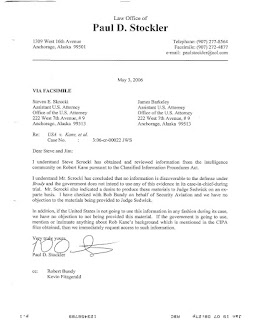 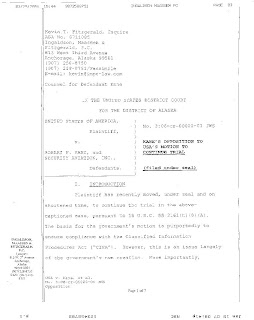 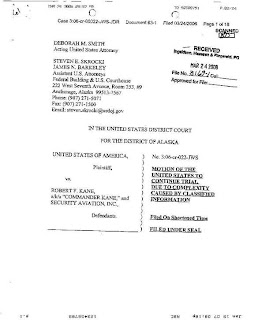 Anchorage,AK-Oct, 23-Here art the motions and letters to seal information that the U.S. Attorney's office obtained from the intelligence community. If Kane was not an operative for a U.S government agency, or other worldwide organizations, then why was this case protected by the Classified Information Protection Act?

Please click on the images above to enlarge and read them.
Posted by Akfotoman at 2:04 PM No comments: